What is TMS Therapy?

TMS (transcranial magnetic stimulation) is a new, safe and highly effective treatment for patients with major depression who aren’t satisfied with the results of conventional psychiatry and pharmacology.

Numerous clinical studies and countless patients have testified to the benefits of TMS in the short- and long-term treatment of major depressive disorders. TMS was approved by the Food and Drug Administration (FDA) in 2008. Today, TMS treatment centers and specialists can be found across the United States. Over 300,000 TMS therapy treatments have been safely performed on over 12,000 patients throughout the country.

How does it work? 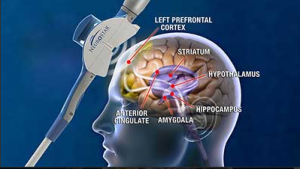 TMS technology is similar to MRI (magnetic resonance imaging). It uses precisely targeted magnetic impulses to stimulate key areas of the brain that are underactive in people with depression. The procedure is non-invasive, relatively painless, and requires no anesthesia or sedation. Treatment lasts around 40 minutes. During treatment, you sit in a comfortable reclining chair similar to that found in a dentist’s office. A small magnetic coil is placed gently next to your head and delivers magnetic pulses to specific areas of the brain. These currents activate cells within the brain that are thought to release neurotransmitters, which play a role in mood regulation. Since it is believed that depression is caused by an imbalance of chemicals in the brain, TMS helps restore balance and relieve the symptoms of depression. Typically, patients need TMS therapy five days a week for four to six weeks, depending on their condition and response to the treatment. Patients are awake and alert during the therapy and can go back to their normal activities immediately afterward.

Are there any side effects?

TMS is free from the side effects often associated with antidepressant medication, including nervousness, weight gain, upset stomach, sexual problems, sleepiness and memory loss. The most common side effect of TMS is some pain or discomfort at or near the treatment site, but this occurs only initially and usually goes away after the first week of treatment.

What are the benefits of TMS? 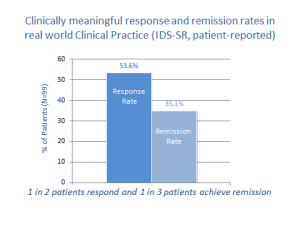 Many patients experience significant benefits from TMS. Two in three patients reported a remission of their depression at the end of TMS therapy. Significant cost savings may also be expected with TMS compared to conventional drug treatments. TMS is much less invasive than deep brain stimulation, electroconvulsive therapy (ECT) and other alternative treatment options for depression. There are continuous independent studies proving that TMS treatment can relieve not only the symptoms of depression but other common disorders as well, such as anxiety, post-traumatic stress, tinnitus, schizophrenia, autism and addictions. Although, currently the only FDA approved use is for recurrent major depression. TMS has given thousands of people new hope every day.

Find more stories of hope and healing from past patients here.