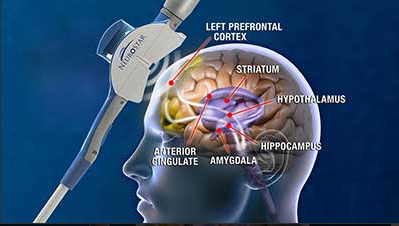 In December of 2012, Stephanie S. was taking 300 mgs of sertraline (Zoloft), 300 mgs of (bupropion Hcl) Wellbutrin, 300 mgs of trazodone hydrochloride (Desyrel), 200 mgs of risperidone (Risperdal), and 8 mgs of alprazolam (Xanax), but was as depressed as she has ever been. She had also gained 100 pounds as a side effect of all the medications. Having tried a total of 10 different kinds of drugs with no success, her doctor recommended transcranial magnetic stimulation (TMS), a non-invasive procedure that stimulates nerve cells in the brain with short magnetic pulses. A large electromagnetic coil is placed against the scalp which generates focused pulses that pass through the skull and stimulate the cerebral cortex of the brain, a region that regulates mood. The procedure was approved by the FDA in 2008. Read more.